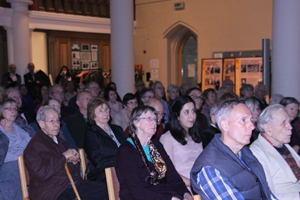 For the occasion of International Women’s Day, ILA held a meeting at St John’s Church in Notting Hill on 11 March 2017. Participants enjoyed a range of talks, videos and live music plus the opportunity to see an exhibition of 165 years of women’s struggle for equal rights in Iran. Rana Rahmani was the host and she also entertained the audience with playing famous Persian tunes on piano. 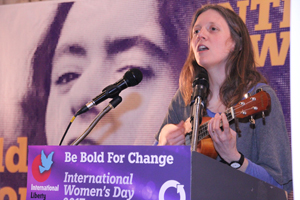 Rosa Conrad played the ukulele and sang beautiful songs. Also on stage was Holly Shahverdi who sang ‘The Daughter of Iran’, ‘I Didn’t Know My Own Strength’ and ‘When You Believe’ with passion and strength. Christina Anderson played the harp and Jenny Sanderson read the poems she had written for the occasion. Other speakers included Dr Francesca Haig and Mrs Elizabeth Morgan. We thank everyone for taking part in the event, especially those who contributed to its organisation, played music, sang songs, and made speeches. 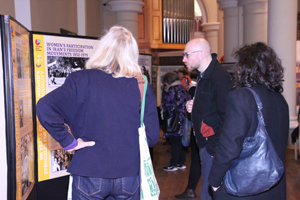 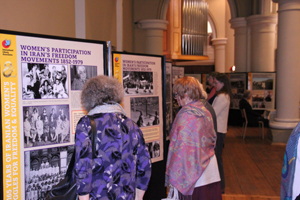 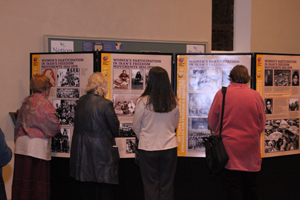 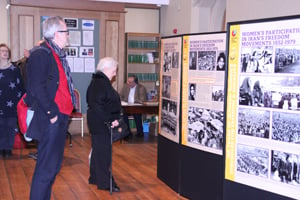 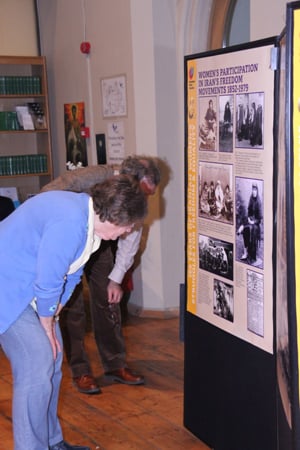 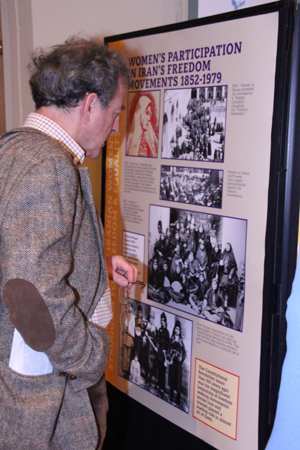 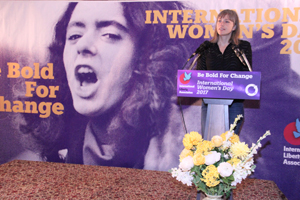 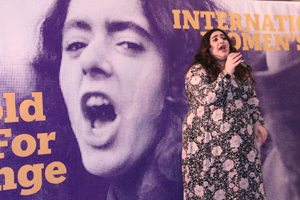 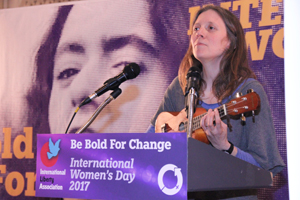 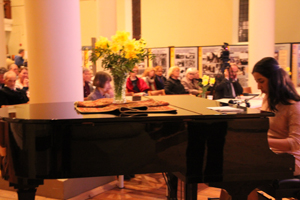 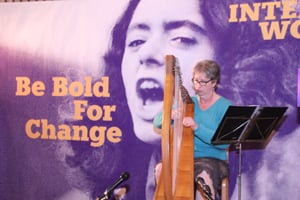 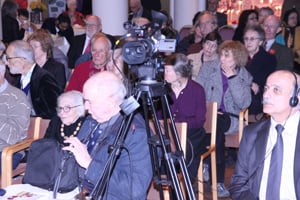 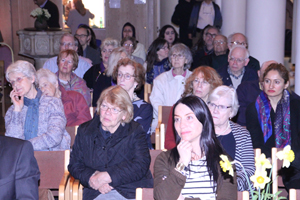 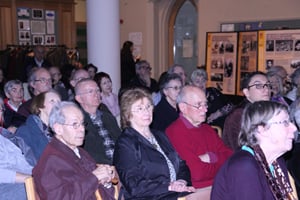 Following are the poems read by Jenny Sanderson at the event followed by excerpts from the speech by Dr Francesca Haig. 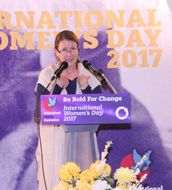 In my small, safe, sheltered world,

I had some vague understanding

Of how some humans work.

I put my head in the sand,

Tried not to look,

And told myself (to make it better)

That “most bad comes from fear.”

When people did bad things,

I gathered up my children,

My husband, my own,

And fenced them round,

With love and safety.

I tried to teach them good from bad,

Kindness, honour and to speak up.

To hold their own and tell the truth.

I have no power to heal the world.

My ripples will expand – ring upon ring,

And my children’s ripples will expand,

And their children’s ripples will dimple

The world will be a little better.”

But now I understand,

That there are quiet heores.

I pass them everyday unknowing –

In the bus, behind the counter,

No leotards or cloaks,

No underpants on top,

No special powers or X-ray eyes.

In troubled times, they gather in their arms,

Not just their family.

Their arms embrace their family,

When faced with evil,

Look it in the eye.

They heave great boulders from the clifftops,

And they create enormous waves,

That crash, foam and tumble,

Travel across oceans, and

Lap on far off shores,

Of honour, love and unity.

When the whole world seems,

Too mad, too horrible to bear,

I remind myself and my friends,

Of these quiet heroes.

And it gives me hope.

I will never understand “the headscarf thing.”
A message from one woman to another.
By Jenny Sanderson

I will never understand the headscarf thing,

It seems to be,

(When I look in the mirror),

I can’t quite believe,

Deep in my heart,

That you’ve not been brainwashed,

Forced to wear it –

Made to believe it’s a symbol,

Of your religion, your identity,

And as I learned,

I guess therefore that there are those of you,

Who think me brainwashed too.

The strongest women I have ever met,

Choosing to wear the headscarf,

Because you believe it symbolises,

What and who you are.

However much we talk,

That we will ever make sense to each other.

But all that matters,

Is that we can talk,

Without fear of offence,

And that we accept each other’s truth,

And try to make this world,

A world in which each one of us can choose.

Excerpts from the speech by Dr Francesca Haig: 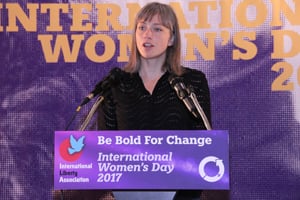 One of the unique horrors of the final months of Camp Liberty was that the camp’s residents were trapped between two increasingly likely fates: the ongoing rocket attacks orchestrated by the Iranian regime, and the advance of ISIS on the other side. For the women and girls of the camp, the spectre of ISIS reaching the camp held particular terrors – and we’ve all read and heard about ISIS’s brutal treatment of women. But although Rouhani espouses his opposition to ISIS, his own regime’s treatment of women is also reprehensible.

It’s worth taking a moment to reflect on the current situation for women in Iran. The 2016-17 Amnesty International report on Iran showed that ‘Women and girls faced pervasive violence and discrimination’. The Mullahs continued their crackdown on those who stand for women’s rights, and as Amnesty noted, ‘increasingly likened any collective initiative relating to feminism and women’s rights to criminal activity.’ This conflation of feminism with criminality is interesting, and we’ll return to that later.

Those courageous women who campaigned for political representation in the elections were arrested, and suffered ‘lengthy and oppressive,’ interrogations, and threatened with ‘imprisonment on national security charges.’ In all areas of life, including law, economics and politics, women continue to suffer discrimination. We see this in the compulsory veiling, violently enforced by the so-called ‘morality police.’

The regime continues to promote policies that prioritise ‘early marriage, repeated childbearing, fewer divorces and greater compliance to “traditional” roles of women as housewives and men as breadwinners.’ Those women who are victims of domestic violence have little recourse, and find themselves pressured to remain in abusive marriages. Furthermore, there are inadequate protections against ‘sexual and other gender-based violence, including early and forced marriage.’ And if you read courageous firsthand accounts, such as Azam Hadj Heydari’s The Price of Being Human, you’ll hear how the regime uses systematic sexual abuse as one of its many forms of torture. It comes as no surprise that a regime that doesn’t hesitate to employ systematic sexual violence fails to legislate to protect women. In 2012 a draft bill to criminalise abuses such as marital rape and domestic violence was published by the Vice President on Women and Family Affairs; five years on, that draft bill remains pending, and women victims still lack protection under the law.

The Guardian reported, just last week, how an all-women panel show on a Persian satellite TV show available in Iran has incurred the wrath of the regime: ‘Pro-regime news agencies in Iran say the programme is committing the crime of “promoting women’s rights”. One news story explains that “these women shamelessly motivate other Iranian women to stand for their legal rights and civil rights”. The fact that the regime has responded in this way to something as innocuous as a chat show is a sign of how threatening they find the concepts of women’s rights. In their 2016 arrest of Canadian/Iranian academic and anthropologist Dr Homa Hoodfar, the Prosecutor General of Tehran stated that her criminal charges arose from “her entry into fields concerning feminism and national security offences”. While Dr Hoodfar was eventually released in September last year after 116 days in prison, the language that the Mullahs’ regime used to describe her so-called ‘crimes’ is telling. Women’s rights are threatening to this regime. As Maryam Rajavi has noted: ‘misogyny is one of the major attributes of the fundamentalist dictatorship ruling Iran.’ The rights of women represent so much of what the Mullahs oppose: equality; anti-fundamentalism; freedom of expression; liberty. The regime’s own response to those who fight for women’s rights, is proof more than ever of the importance of that fight.

Given the alarming rise of religious fundamentalism and misogyny globally, and in the Middle East in particular, it’s truly heartening to see how women’s rights have been central to the agenda of the ILA and the future for which it advocates. The fact that Dr Hoodfar, and those women who advocated for women’s representation in recent elections, were all accused by the regime of threats to ‘national security’ is hugely revealing. The Mullahs know that their regime cannot and will not withstand the advent of equality for women.

Months ago, in that seemingly impossible situation for Camp Liberty, this movement managed to get the surviving residents out of Liberty and to Albania, where they are now continuing their tireless and courageous work, with women and women’s rights at the heart of what they do. That this apparently impossible task was achieved is an example that the third way is possible. In a time when women’s rights are under attack around the world, and more than ever in Iran, it’s inspirational to me that the ILA continues to advocate for women’s rights, and more important than ever that we continue to help them to do so.