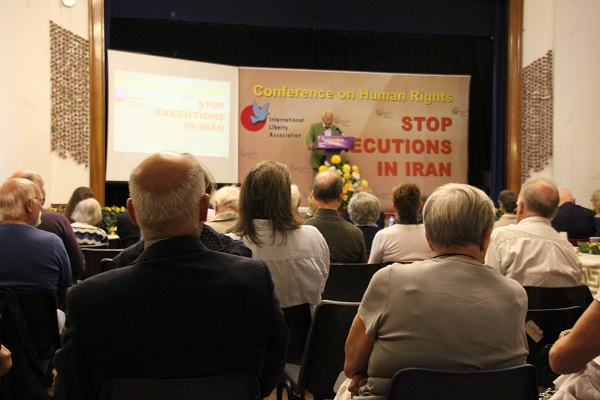 The ILA event held in Lambeth on 27 July 2017, moderated by David Harris, was well attended and participants had the opportunity to see the exhibition and talk to Struan Stevenson, former MEP who had come from Edinburgh to address the conference.

During the event we also heard from Ibrahim, one of the 36 hostages of Camp Ashraf abducted during the attack on 28/29 July 2009, which was also commemorated.

In his keynote speech at the event, Struan Stevenson, an international expert on the Middle East and former Conservative MEP said: “In 1988, 30,000 political prisoners were massacred on the direct orders of Ayatollah Khomeini, the founder of the Islamic Republic. The current Justice Minister of President Rouhani’s government was one of the key executioners in Tehran during the 1988 massacre and now he says he is proud to have killed so many PMOI members. The other key murderer in charge of the 1988 slaughter was Ebrahim Raisi, the black-turbaned mullah who the current Supreme Leader, Ayatollah Khamenei, is cultivating as a future successor, ready to take over from him when he dies. It is incredible that we in the West believe it is acceptable to have so-called ‘constructive dialogue’ with murderers and butchers like this, who remain in powerful positions in the leadership of Iran today. These people must be indicted for crimes against humanity and brought to justice before the international court in The Hague.”

Mr Stevenson continued: “The Iranian regime plays a destructive role in the Middle East and the systematic violation of human rights across the zone characterizes their aggressive attempts to spread Islamic fundamentalism. The Iranian Islamic Revolutionary Guards Force (IRGC) and the body responsible for extra-territorial operations, the terrorist Quds Force, are the main vehicles for Iran’s aggressive expansionism in the Middle East. The IRGC has for decades been carrying out terrorist attacks across the zone, including in Syria, Iraq, Yemen and Lebanon.

“I was delighted to see that on Tuesday 25 July, the U.S. House of Representatives voted overwhelmingly (419-3) in favour of imposing new sanctions on the Iranian regime, including the blacklisting of the IRGC. “Over the past six years the world has witnessed in horror how the Syrian dictator Bashar al-Assad has massacred his own people, even using chemical weapons like Sarin gas to murder innocent men, women and children, while enjoying unlimited financial and military support from Iran and air cover from the Russians. The IRGC finances, arms and leads most of the brutal Shi’ite militias rampaging through the predominantly Sunni provinces of Iraq, massacring families and levelling ancient cities like Ramadi, Fallujah and Mosul in the name of the war against Daesh (ISIS). The Iranian regime’s violence and crimes in other countries in the region and in particular its suppression of the Sunnis, carried out under the banner of fundamentalist Shi’ite Islam, is what provoked the original backlash that in turn spawned the birth of groups like Daesh who seek to establish an “Islamic Caliphate” while spreading their violence, brutality and hate to the four corners of the globe.

“Iran cannot be part of the solution to the conflicts raging in Iraq, Syria, Yemen and Libya. It is part of the problem. Iran exports terror. This is the real Iran under the theocratic and fascist rule of the mullahs, whose so-called ‘moderate’ president Rouhani the West believes it can do deals with. We should wake up! The ‘smiling’ Rouhani is in charge of a venally corrupt government that has executed over 3500 people since he took office in 2013 and which is behind every conflict in the Middle East”.

Mr Stevenson ended his speech by thanking everyone for their selfless support of the cause, emphasising that without such support the Ashrafis would not have been saved and closing with the touching and impassioned words “I will be proud to remind my children and grandchildren that I am an Ashrafi”.