Reza Khandan and Farhad Meysami were both sentenced to six years behind bars and banned from leaving the country or engaging in online activities for two years for peacefully protesting the country’s compulsory hijab law.

The sentence was handed down by the Tehran revolutionary court, the state-run ISNA news agency reported.

Mohammad Moghimi, who represents both defendants, said they would appeal.

Reza Khandan, the husband of jailed Iranian human rights lawyer Nasrin Sotoudeh, had raised concerns on Facebook about human rights violations in Iran, including the imprisonment of human rights defenders and the prosecution of women who have campaigned against forced veiling (hijab).

Reza Khandan has publicly campaigned for the release of his wife, Nasrin Sotoudeh, who was arrested on 13 June, 2018.

Sotoudeh is currently being held in Tehran’s Evin prison, charged with several national security offences, including “insulting the Supreme Leader” and “spreading propaganda against the system.”
She had already been found guilty, in absentia, of espionage charges and sentenced to six years by the Tehran revolutionary court.

Farhad Meysami, 48, a doctor and publisher, was arrested in his office in July and taken to Tehran’s notorious Evin prison.

Meysami has been accused of “collusion and conspiracy to threaten national security,” “disseminating propaganda against the system” and “insulting the hijab, an essential sacrament of Islam.”
He has also been charged with “provoking women to appear without hijab in the street.” 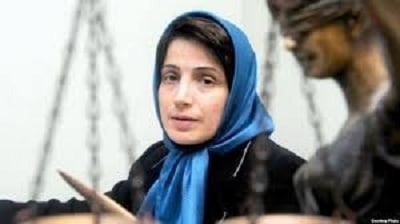