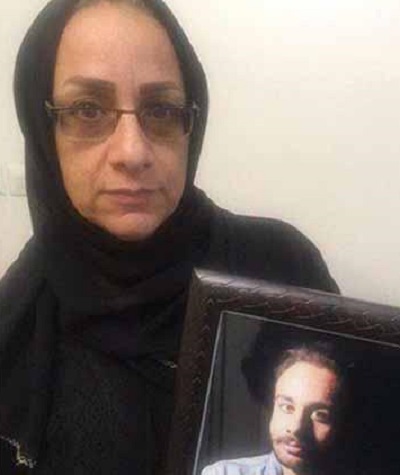 Mother of Sina Ghanbari, a 23-year-old man who suspiciously died in the “quarantine” ward of Evin prison in January 2018, says her son was murdered in prison.

Regretting her one-year silence Fatemeh Malayan Nejad said: “My son did not commit suicide, he was beaten in prison. At the time I took my son’s body, they did not allow me to speak, but I would have spoken to prove Sina’s innocence, then I can finally find peace in my heart.”

She continued: “Sina was planning for his birthday, and it is not possible that a young man with such a spirit would commit suicide. Six days after Sina’s arrest, just on his 22th birthday, an officer called me and said that your child had committed suicide. My son had planned his birthday a month earlier, how could he take his own life on his birthday?”

Mrs. Malayan Nejad explained that during his arrest Sina had twice contacted her saying he was beaten. She emphasized that over the last year she had not believed that his son had committed suicide.

Sina Ghanbari, 23, was reported died in January 2018, in Tehran’s Evin prison, the country’s most notorious jail.
There was conflicting reports about the circumstances surrounding Ghanbari’s death, with activists disputing the authorities’ claims that he had committed suicide.

Sina Ghanbari was arrested by the security forces during the December 2017 protests in Iran.