According to Reza Khandan, his wife, a prominent Iranian lawyer Nasrin Sotodeh, has been convicted on a range of charges after defending mandatory hijab protesters.

Nasrin Sotodeh has been convicted of security-related crimes in a closed-door trial and could face a “very lengthy sentence”.

She was seized at her home by security agents and placed in Evin Prison in Tehran, last June.

Nasrin Sotodeh, 55, who previously served three years in prison, was convicted in absentia by a Revolutionary Court in Tehran.

She refused to attend the trial because she was not allowed to select her own counsel. The Revolutionary Court conducts closed-door hearings over alleged threats to Iran’s government.

The charges against her include membership in a human rights group and “encouraging corruption and prostitution”, among other things, which suggests that she was arrested for defending mandatory hijab protesters.

Reza Khandan, who faces a six-year prison sentence for providing Facebook updates on her case advised that Evin Prison authorities are increasing pressure on female inmates in an effort to stop them from leaking details on the case or the conditions they are kept in. He also said that Sotodeh had not received the verdict or her sentence in writing.

In an urgent letter published on 4 March, 2019, to the head of Iran’s Judiciary, Ebrahim Raisi, Amnesty International called for the immediate release of the 55-year-old human rights lawyer.

Amnesty International stated, “The charges against Sotodeh stem solely from her peaceful human rights work, including her defense of women protesting Iran’s forced hijab (veiling) laws, and her outspoken opposition to the death penalty.”

“I urge you to release Nasrin Sotodeh immediately and unconditionally as she is a prisoner of conscience, jailed solely for her peaceful human rights work. Pending her release, please ensure that she has regular contact with her family and a lawyer of her choosing. I urge you to stop criminalizing the work of women’s rights defenders, including those who peacefully protest against forced hijab, and abolish forced hijab laws,” Amnesty International said.

Nasrin Sotodeh has been in prison since June 2018 after she was detained for representing women who had been arrested during protests in Iran.

She was tried in absentia in December 2018, at Branch 28 of the Revolutionary Court in Tehran, presided by Judge Mohammad Moghiseh. She refused to appear in court because she was denied the right to choose her own lawyer and opposed the unjust nature of the judicial proceedings. 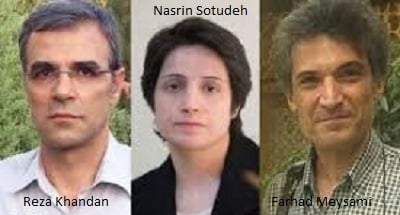