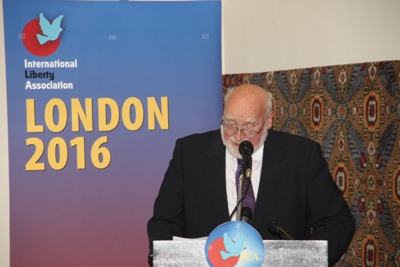 The event in London went very well we had traditional persian cuisine and the hall was set up in a way that it appeared to be in the middle of the streets of Tehran. The following are speeches and comments made by supporters of the ILA who attended the Event.

JULIAN: It has been a long struggle, but I was very impressed by your continued hope and determination. I was particularly pleased to hear the two girls who had been brought to safety from Camp Liberty and to see that the US Congress is doing more to ensure the protection of those who remain 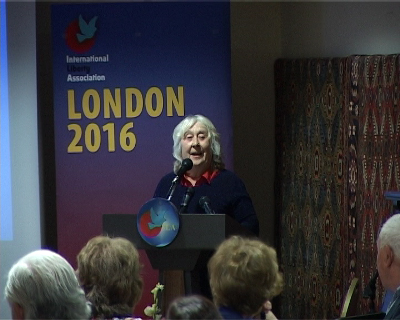 LIZ CARTER: I’ve been involved with the Iranians since 2004 and I first went to a Grand Gathering in 2007- 2008, and it was a very very moving experience, and there were 15,000 to 30,000 people there, and that was a tribute, you have to remember that Grand Gathering is centred around the 20th of June every year, because Iranians have gathered together since 1981 when half a million people, in a peaceful demonstration in Iran for democratic rights were brutally attacked – hundreds were killed, thousands were injured and many were executed, you know, imprisoned and executed. So every year since then Iranians gathered together. But when I heard “The Day of Reckoning”, when you hear, “etched in the ruins, witness the dawn of your demise”, for me the dawn of the regime’s demise was in 2009, when they attacked Ashraf, and when they took 36 people hostage and they held those 36 people hostage for 72 days, because that’s when to people like myself and many all over the world Ashraf became their spiritual home, and it became a beacon and it drew like a magnet, and it became the core for all the people who care for freedom and peace to gather together. And the Grand Gathering grew exponentially, so in 2010 there were 50,000 people, 2011 there were 75,000 people, by 2012 there were over 100,000 people, and not just Iranians gathering, but more and more supporters from around the world, an incredible array of speakers from around the world. It was focused and started as a tribute, now it is a celebration, a celebration of friends and family gathering from all over the world with common purpose. It’s a massive show of solidarity. And it’s a chance for us to see, just experience, suddenly you are there with people from all over the world, massive array of speakers, massive array of media. But also they get their encouragement from seeing the mass of people. When the people from Albania first
came and they stood on that stage, they looked out at this sea of people, and it gave them encouragement that they’re actually doing the right thing, they’re not just going out on a limb, that they
are part of a massive family across the world who actually are supporting this cause. So for all these reasons, it’s a very very important, very very powerful occasion, and every single person on that bus and every single person in that hall makes a difference.

DAVID HARRIS: It was put more eloquently than I could put it and more succinctly [by Taha Boumedra]: you cannot subordinate human rights to our commercial interests, and let us say 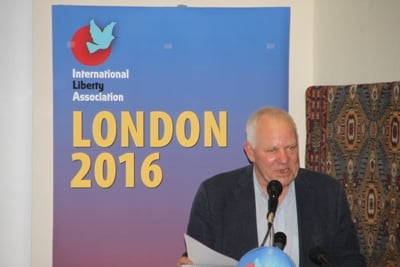 that, loudly and clearly, to all we know, whenever we hear that “well, of course the government has to do business with these people doesn’t it?” That is not the way the world can be run and there are many occasions, many many occasions, when more liberal governments have come together to stamp out some abuse in the world, it’s just that they won’t do it if they think they might lose something significant in terms of commercial advantage, which is obviously what they feel with Iran. Let’s not forget, though, I mean it’s only just recently that they have removed sanctions, so there are circumstances in which things like economic sanctions can be imposed. But that’s the picture in Iran itself, but of course the bigger picture is: Iran, from its very inception, is a terrorist regime. The mullahs are in a sense terrorists and more significantly, we know and the world knows that they make it their business, their primary business, to foment terrorism elsewhere. Everybody knows, nobody attempts to deny that. Well, if anybody in this room seriously thinks that Tehran can be recruited as an ally against ISIS, forget it. They don’t want peace in the Middle East, we know that by now, so if only out of self-interest and the interests of world peace, the mullahs must go and we must keep the flame burning until that change finally takes place.

WILLIAM HUGHES: It is something of a tragedy for the world that Barack Obama did not feel that the USA was strong enough to challenge Iran over its human rights violations, its corruption, its fundamentalism and its perversion of Islam into a dogma which has enslaved the Iranian people into perpetual rule by an ignorant clergy. In such circumstances civilisation itself cannot
now exist in Iran and there is only dogma, regimentation and oppression. Rationality is thrown out of the window. Because it was not challenged, largely because of the appeasement policies
of the United States, fundamentalism has spread from Iran to the rest of the Middle East, causing the havoc we see there at present. Let us look at where this fundamentalism started up in our
time: Iran and Ayatollah Khomeini. Executions of anyone who opposed the Iranian Revolution have taken place ever since he came to power and Ali Khamenei, the “Supreme Leader” echoes his ideas and seeks to spread this narrow political interpretation of Islam, in which the clergy in all their ignorance, rule. Hassan Rouhani has fooled the West into believing that he is a moderate,
while all the hangings and oppression continue and increase daily. Sectarianism and division cannot be allowed to dominate our world. Without unity our delicate world will disintegrate. So it is our duty to work for unity and loving acceptance of our fellow men and women.