OUR EVENT IN WATERLOO

This event was for remembrance of the 1988 massacre in Iran when 30,000 prisoners were executed by Khomainy’s secret, but extraordinary Fatwa.

Dr Tahar Boumedra, the great friend of Ashrafis who sacrificed his UN career in order to protect his own integrity and the lives of Ashrafis was the keynote speaker who made a passionate speech about his time in Iraq as the UN human rights chief, Captain Dennis Barber and Mr Nicholas Weedon, both long time supporters of the cause who have also met with the Ashrafis in London and in Tirana, were the speakers at the event.

At the event we also enjoyed the music played and sung by David Hopkins as well as having comments and questions from the floor that made for a very lively event.

In our event at Waterloo, Dr Tahar Boumedra, the great friend of Ashrafis who sacrificed his UN career in order to protect his own integrity and the lives of Ashrafis was the keynote speaker who made a passionate speech about his time in Iraq as the UN human rights chief. Excerpts of his speech appear below: “What I want to tell you tonight is just to share some little experience with you, some remembrance that stuck in my mind about the … Ashrafis. “The Ashrafis were so, were so ingenious. They created a lot of things out of nothing. And can you imagine, during those hard days, hard time, under the government of the former Prime Minister Al-Maliki, the pipes, the water pipes coming from the Tigris into the camp were vandalised by the Iraqi army, and it was an operation to cut off the water.

“Can you imagine the billions the Iraqi government were spending, and it all goes in the air, into looting and bribery and corruption; while the Ashrafis, with very little means, they managed to pump the water for over thirty kilometres, and bring it to Camp Ashraf, filter it, sanitise it and be self-sufficient in terms of drinking water. And not only that, they had surplus which they shared with the dwellings of the Iraqi population around the camp. They shared this with them and also they shared it with the Iraqi army oppressing them. So when I saw earlier the film about Camp Ashraf 3, I said: ‘This is typically the Ashrafis. They are ingenious. They could do it’. “Camp Liberty, it was me who visited it first, and I reported that Camp Liberty was not suitable for accommodating refugees, and I gave all the reasons why it’s not suitable. But because they are so industrious and they work so hard, within a few months Camp Liberty became comparable to a very good camp for refugees. “And then there was this attack on the 1st of September (2013).

By then I was out of Iraq. But the Government of Iraq declared that they knew nothing about it, they had nothing to do with it, and probably they just killed each other. And I was very upset. I was very upset because I knew that nothing could happen in that camp without the direct involvement of the Iraqi security forces in place. Even if the perpetrators were Iranians or some terrorist groups, the real culprit is the Government of Iraq who facilitated access to that camp. Can you imagine, you go into a camp, you kill 52 people, scattered all over a large area, that involved a lot of shooting, it involved a lot of shouting, it involved a lot of noise, and all this happened while the camp is monitored by the police inside and surrounded by the Iraqi army. So we know that nothing, absolutely nothing, could happen in Ashraf or to Ashrafis without the direct involvement of the Iraqi security forces and the Iranian agencies.

So now remembrance of that day is very painful to me personally because I really worked very very hard, and I was on my own. I didn’t know you existed here as supporters and friends of the Ashrafis. “So, I was working and doing my best, and … like many of you, I sometimes say: ‘Oh, is my presence going to make any difference?’ And it really, believe me, it really makes a difference. Every participation, every little contribution, every little presence, everything you do, it makes a difference. You have gone and accompanied these people for a long way and the fact that they have not been exterminated, even though I could tell you that the Iraqi government in place from 2008 to 2012, that government had the intention of exterminating them and I am very happy to know that a large number have left Iraq safely, and now they enjoy the freedom they are enjoying in Albania, and some of them as well in Europe and beyond Europe. “What they have achieved is absolutely unbelievable… and even though we congratulate the Ashrafis at first hand, but we should also congratulate ourselves for what has been done and what has been achieved. “I think we should all be proud, proud of whatever little we have done. So if you allow me on behalf of all the victims I witnessed I say to you, thank you, and thank you so much!”

Other speakers at the event were Captain Dennis Barber and Mr Nicholas Weedon, both long time supporters of the cause who have also met with the Ashrafis in London and in Tirana. Excerpts of their inspiring talks appear below. Captain Barber: “My wife and I got on the plane and we went to Albania not knowing what to expect. Albania is a place which up until that time had been associated with dictatorship, all kinds of the opposite of freedom, I knew that it had come out of that, but I wasn’t sure just how it had come out of that. But when we arrived, the thing that struck me was the welcome, far better than you get in the UK when you arrive here. “Then as we went down into town the next day, we went down to what is now called Ashraf 3. What we got was “welcome, welcome, welcome” and “Thank you”, the other thing that was said more than anything else. “It made me feel very humble, and we were sung to, we were welcomed, we were fed, we were treated like royalty.

“The people who deserved that were the people who were doing it. Because what I saw was the amazing resourcefulness, somebody spoke about that earlier on, the resourcefulness and the ingenuity of people to produce a city out of dust, more or less the same as what they’re doing again, and that was so encouraging to see. “But these people, I thought, what is it that’s so special about them? What is it that’s special about these people? And it came up in the song we had earlier on, a very gentle song. I’ve never heard it sung so gently before. It was so powerful in such a gentle way, because this is how it’s happening. It’s happening gently. The mullahs don’t understand that. They do not understand that. These people are full of love. We just were showered with love when we arrived in Albania, and right to the time we left, right to the time we stepped onto the plane, we were still showered with love. The mullahs don’t understand that. They have a dream, they have a dream of freedom …They have a dream of love triumphing over hate, but more than anything they have a dream to return home.”

Nicholas Weedon: “I thought that it’s a fantastic thing that this remembrance of the 1988 massacre has been pulled into the foreground … I was very heartened in the Paris conference to see the video clips from Iran making specific reference to this campaign and how it’s all really beginning to come together on both sides. And another thing I just saw this evening which I’d like to acknowledge was on that clip of the orchestra playing in Ashraf 3. It has always struck me when I came to meetings in the time of Ashraf and Camp Liberty … they were hurling music across the border, and I thought that was very poignant.

And it’s great to see that … they’re really getting their music and orchestra back, so they can start hurling the music across the airwaves back into Iran. And so this campaign is really important because it’s about exposing truth, and it’s been truth that has been covered up for too long – you can’t really stop the truth, and just bringing this truth out with simple humility and dignity as this campaign is doing. I thought that [song] was another poignant thing this evening … that ‘the answer’s blowing in the wind’, and it’s really a matter of making it, just bringing out the self-evident degree to which that regime is discredited, because the people who lead that regime, they are directly responsible for ordering massacres, and as that comes out, as that discrediting becomes self-evident, only good things can come from that.” At the event we also enjoyed the music played and sung by David Hopkins as well as having comments and questions from the floor that made for a very lively event.

Photos of the Event: 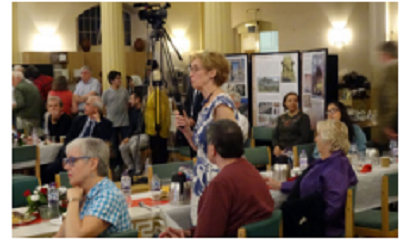 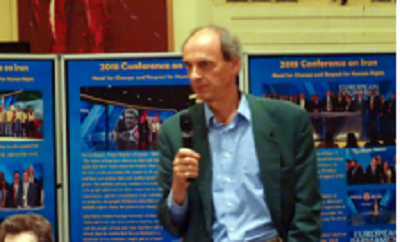 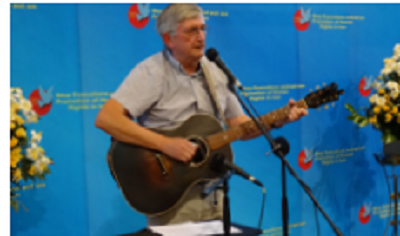 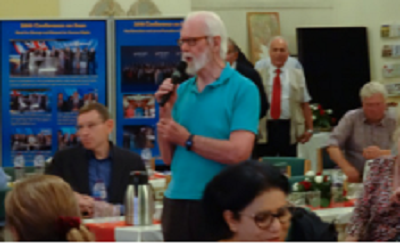