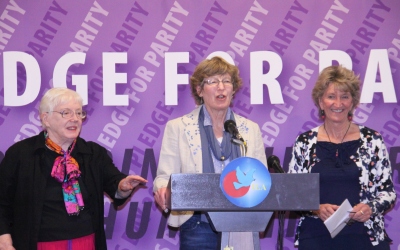 Our event in Oxford on 12 March was dedicated to International Women’s Day. The keynote speaker was Ingrid Betancourt who was warmly welcomed by the participants. Her speech appears as a separate article in this bulletin.
Other speakers included Dr Janet Horrocks, Dr Jacquie Drake, and Mrs Joan Williams in addition to the volunteers who talked about their ordeals and inspirations.

We also enjoyed piano by Alice Caterer and Rosa Zarei and drum by Bahman. 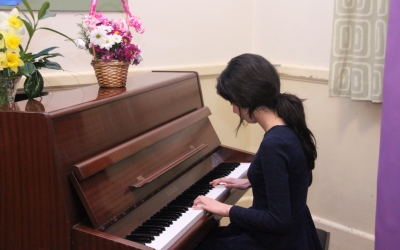 Excerpts of the talk by Dr Drake who also provided the text of her talk for the bulletin, appear below:

I have supported the International Liberty Association since I first met some of its members six years ago on the corner of Cavendish Square in London one cold winter’s day. As we spoke, I knew that had I been born not in England but in Iran, I too would have been one of those women – the Ashrafi Women. I was immediately impressed by their concern, their humility and their deep commitment to those in Camp Ashraf. 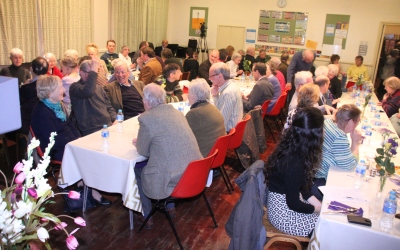 As I got to know them better, I felt their kindness, their humanity and their unflinching determination to do the right thing. Becoming a ‘friend’ has been a privilege. On Tuesday, we marked International Women’s Day – a celebration of women and their achievements, world-wide. Whom, I ask you, is more deserving of our respect, appreciation and love than the extraordinary women of this movement for human rights and political freedom in the face of oppression, cruelty and hatred. Some of these women stand modestly around this room – others stand resolutely in Camp Liberty, living under siege, deprived of food, fuel and medical care, ever since the most recent rocket attacks killed over 20 of their friends and relations, last October The Mullahs allow slavery of women, sexual abuse of children and polygamy. Rape and violence against women is overlooked, the veil is mandatory and special agents enforce the law – they confronted 3.6 million women in the street in one year alone for being “improperly dressed”, 18,000 were put on trial, others had acid thrown in their faces… the list goes on and the ‘Ashrafi women’, in Camp Liberty, Tirana, Paris and here in the UK, continue to be a “beacon of hope” for Iranian women, long after they were driven out of Camp Ashraf.

The Ashrafi spirit lives on… and it is brave, joyful and irrepressible. These women are an inspiration. They are not alone: they stand alongside equally brave and resilient men. And us. Let us support them in the spirit of international liberty and down-to-earth British decency.

Camp Liberty is in mortal danger. We have to get them out. Together we can, whatever it costs.