Our event for the occasion of International Human Rights Day on 10 December was well attended. Our guest speakers included Peter Mathews TD, member of the Irish Parliament, and former MEP from Portugal, Paolo Casaca. Mr Casaca had travelled to Iraq and visited Camp Ashraf 5 times during his term as an MEP between 1999 and 2009. 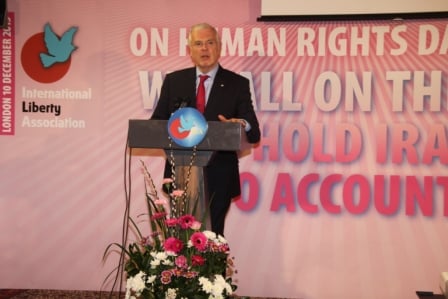 PETER MATHEWS: It makes my heart feel bigger and stronger when I see a group of people like yourselves who are part of the support body, the support engine for these hugely courageous Iranian people.

It’s really grotesque when [some] people are so addicted to power that their toxicity, you know, takes literally the air out of the lungs of the people of their country. Today is International Human Rights Day, the day to remind ourselves that… it doesn’t matter where we are in the world, we’ve got to act, and no matter how small our actions are, they all add up. The butterfly’s wings do make an impression. Keep up the support, do everything you can to energise your relations who may be holding influential positions, to do, to act. 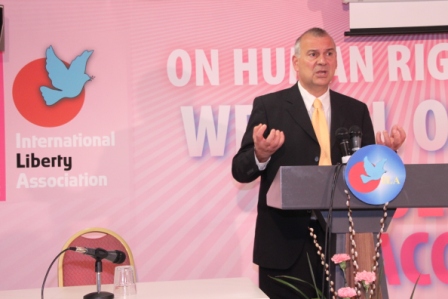 PAOLO CASACA: Right now, looking at you, speaking to you, I think you are wonderful people. You are fantastic, fantastic hearts that are here because you cannot stand injustice. You cannot tolerate the fact that innocent, courageous people now in Camp Liberty, people that were promised so much, that had cards signed by American authorities saying they were under the protection of the United States, and then being attacked so viciously, and still being  dragged out of Ashraf to Camp Liberty after so many other promises. And there were at least seven big attacks, three in Ashraf, four in Camp Liberty, attacks that are absolutely clear who committed them. Actually the last ones, they were publicly recognised to have been done by one of the Iranian backed militias that are running Iraq. And our authorities, they just looked the other side. This does not show in the Press. 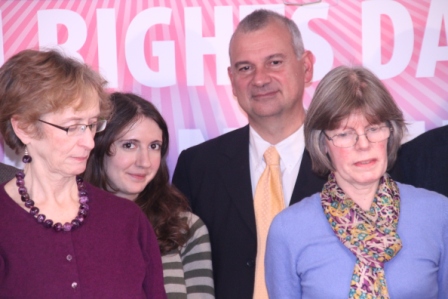 JENNY: Hello to all of you at Camp Liberty. I feel now part of your family here in London and therefore part of your family there. I am in total admiration of the way you are resisting all efforts by the Iranian/Iraqi regimes to put you down. I am confident now that you will not be put down and we are standing with you. We are trying very hard to put pressure on our government to change their stance towards the Iranian regime. You have given us inspiration to keep on trying. You and all your efforts in Camp Liberty inspire us. We want to assure you that we will be carrying on and I would like to see you face to face here in London and maybe also one day in Iran. What a beautiful country it is and I would love to see it one day. But I would also love to entertain you here in our homes in London, just like your family and friends have been entertaining us here today and very often. I would like to wish you all the very best on behalf of my family and all my friends who are also supporting you. We wish you strength and all the very best particularly at this season, Christmas for Christians. My family is partly Jewish so we’re celebrating Chanukah. It’s a festival of light and we hope that we can see the light at the end of the tunnel when you will all be free and all the Iranians will be free. All the best. 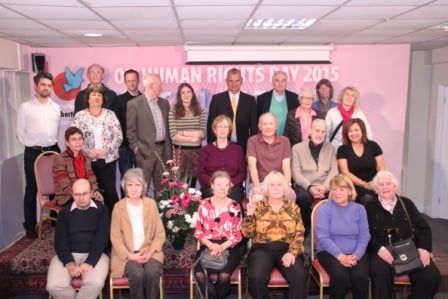 DIANA: I was here a few weeks ago when we were able to talk to you about the terrible massacre that occurred when you were bombarded so brutally. We just cannot imagine how strong you are. We are just in total amazement at your resilience and I’d like you to know that all of us here will do everything we possibly can to make sure that your plight there and the plight of the Iranian people is brought again and again to the attention of our government and the European Parliament. Also, I would very much like to hope that I may be able to help try to get the British press to be able to cover the true situation in Iraq, Camp Liberty and also Iran, as I have one contact, now retired, in the national press. But whatever that outcome, be assured that all of us here will do everything we possibly can to help you and your families and all the Iranian people who just want to be free and live in a democratic Iran. I would just like to wish you all a peaceful Christmastide and a peaceful New Year, and just remember we are with you and we feel you are with us as well. So take heart, love to you all.

STEVE: I think you are unbelievable. Your spirit is incredible. Now you have no roofs over your head. You have nothing, and yet after three days, just three days after the missile attack, you produced a wonderful, wonderful record, wonderful music, standing in the ruin that is Camp Liberty now, completely undaunted and that is the point, that Iran [regime] never seems to get the message. And the more they try to destroy these people, the stronger and more indomitable their attitude becomes. So, to the people of Camp Liberty, I salute you. I think you are the bravest people on the planet. You are an example to everyone and an inspiration to everyone.

LIZ: I am speaking to you today to condemn the despicable attack on the people of Camp Liberty that took place on October 29. Although it was, as I say, despicable, it shows to me the weakness of the Iranian regime that cannot tolerate… It has been wonderful to actually hear from Liberty that their spirit, their courage, their bravery, their commitment, and their resilience is still absolutely incredible and as inspiring as ever.