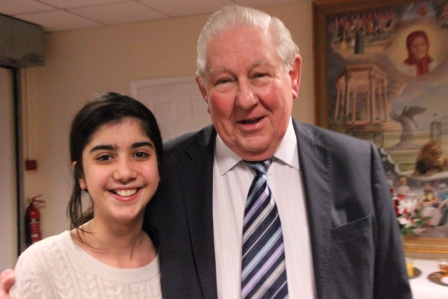 Lord Tony Clarke of Hampstead was the main speaker in our event in London.

He said: I am so happy to be able to say thank you to you. Those of you that have given so much of your time, your efforts, your support, for the people who are incarcerated not just in Ashraf and in Liberty but the people in Iran itself. You have given your time, your love and devotion to a cause.

There is no higher cause, ever, than to be looking after one’s fellow human beings and you’ve kept that going here and I’m so delighted to be able

to spend a bit of time with you.
My mind goes back to the young girl who was in Ashraf, we had a phone link from Westminster to Ashraf. And I spoke to this girl, spoke perfect English, and we expressed our solidarity and our friendship, and then on that dreadful day, that sixteen-year-old girl was murdered with the other residents in Ashraf.

And I always tell politicians, if they want to find out the truth, read the reports from the

regime itself, because unlike many other parts where they cover up their brutality, the regime in Iran – they seem to be proud. And I think the reason for that is, they want to install fear in everybody’s heart. It’s a duty on democratic people to speak out when these
things are going on. We have to, as we do, keep telling our government that they shouldn’t talk about appeasement. Get a hold of that ten-point plan of Madame Rajavi and start working the proper answer to the problems of Iran Thanks for all you do to keep the message going out and the flag flying for freedom.

Join me in my hope and prayer that Iran will be free.